We are extremely pleased with the graphic images covering the Aliant Utility Box on the outskirts of the Park. You will recall that in June 2014 we issued a "Call to Artists" to submit proposals for the painting of the box, but after attempting relentlessly for six months, we were unable to get any artist to commit. We then looked at the approach of having a graphic attached to it and we are so thankful that Greg Seaward offered to draft a graphic design for us. After hundreds of hours, Greg submitted his final concept and the Committee were in awe of how he captured all the aspects of the Park and thus the printing and application began. 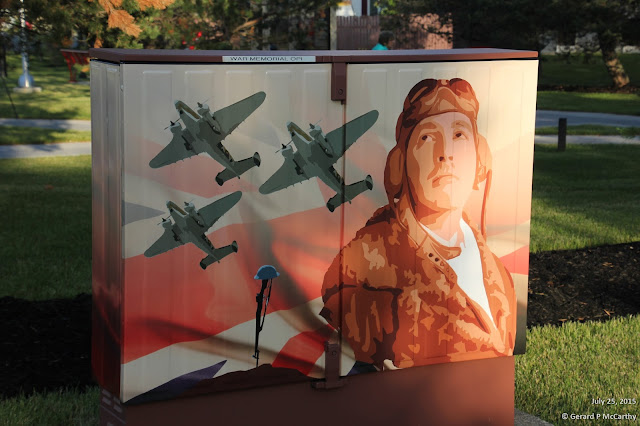 In his presentation Greg describes how he interprets the artwork: In terms of symbolism, the front image (above) represents wartime service, featuring a young pilot wearing a traditional sheepskin jacket, leather cap and goggles, as Hudson bombers pass overhead; the Lee-Enfield rifle and Brodie-style helmet represent those killed in action, and these elements are presented against a background of the Union Jack, the flag which Newfoundlanders fought under at the time. 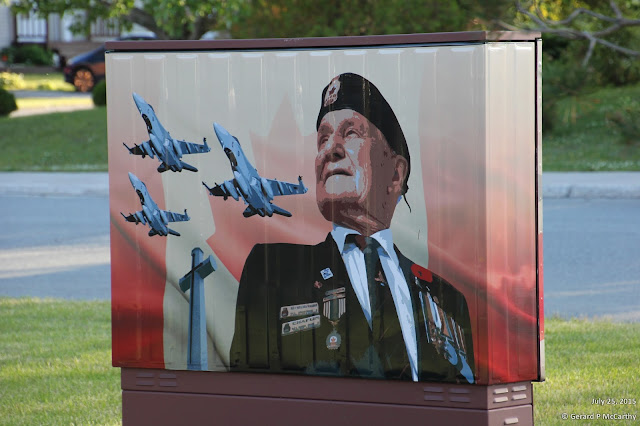 Facing the park (above), the same symbols are presented in their contemporary forms, from the perspective of remembrance: the pilot is replaced by an aging veteran and the aircraft have become CF-18s; the temporary grave marker has given way to the Cross of Sacrifice from the Commonwealth War Graves Commission Cemetery and the background has become the Canadian flag.

It should be noted that in this interpretation, these are simply symbols of the overall theme of the Heritage Memorial Park, and are in no way intended to represent or exclude any specific people or events. For example, the Lee-Enfield and Brodie helmet may also be associated with the First World War, but less so the Korean Conflict; it simply represents the fallen on the figurative 'field of battle', and not a specific conflict or branch of service. Likewise, I chose the Cross of Sacrifice more because of the permanence of stone, juxtaposed against the makeshift rifle/helmet, rather than, say, a poppy to signify remembrance.

We gratefully thank Greg Seaward for the design, Aliant and the Town of Gander for their donations to make this transition from a utility box to a wonderful enhancement to the Park!

Greg Seaward is a former Gander Beacon reporter and now Media Coordinator for the Town of Gander.

NOTE*** Your comments are welcomed!
However, all comments will be queued for review before being published and name=anonymous will be deleted unless your name is included at the end of your comment! This is to prevent spam, etc.
Before you click Publish your Comment please click on Name/URL and enter your full name. Don't forget you have to prove that you are not a robot - this is so automated spams cannot be dumped here!
Thank you. Gerard
Posted by Gerard - Administrator at 5:09 PM

Absolutely wonderful work by Greg! He managed to incorporate so many of the details !
Something he, the Project Committee and the citizens of Gander should be very proud of !